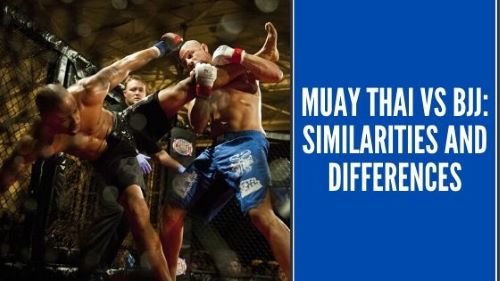 Martial arts like Muay Thai and BJJ are among the most popular sports in the world and are practiced by millions of people the world over. With the rise of mixed martial arts made popular by UFC, there has been increased debate about which martial art is the best.

What is Muay Thai?

Dating back almost three centuries, Muay Thai has a rich history. Muay Thai began in the mid-eighteenth century in Thailand as a fighting method for the army and spread to the wider world in the twentieth century.

The first official Muay Thai ring in Thailand was built in 1921 under King Rama VII who also organized the first official rules for the sport. Known as the art of eight limbs, Muay Thai (or Thai boxing) involves strikes using the hands, feet, knees, and elbows, as well as clinches.

Thai boxing is primarily a stand-up martial art that focuses on strikes to score points and defeat opponents. Due to the inclusion of knees and elbows Muay Thai has a reputation as brutal, and fights can result in a spectacle of blood due to these strikes.

Muay Thai is not currently an Olympic sport but has been recognized by the Olympic Committee as an official sport. Muay Thai became very popular and widespread in the late twentieth century, and now there are almost 4,000 Thai boxing gyms outside of Thailand.

The World Thai Boxing Association was formed in 1968 and is the largest Thai boxing organizing body in the sport, and it was founded by Ajarn Surachai “Chai” Sirisute. Chai was the first Thai to teach the boxing style in the United States and was a major factor in the spread of the sport. Some of the top Muay Thai fighters include Samart Payakaroon, Somrak Khamsing, and Saenchai.

Muay Thai is a prominent martial art style in mixed martial arts and UFC as well as in Thai boxing competition by fighters like Anderson Silva.

What is Brazilian Jiu-Jitsu?

Brazilian Jiu Jitsu, widely know as BJJ, is another prominent martial art. BJJ focuses on grappling and submission holds as as such is mainly a ground-based sport. Made popular outside of Brazil by the Gracie family and their brand of BJJ through participation in UFC in the 1990s, the sport originated in Rio de Janerio in the 1920s and is now popular across the world.

The Gracie family began teaching BJJ in the United States from the 1970s and it now taught around the world for self-defense and competitively. BJJ is currently not an Olympic sport, and the highest level of competition is the World Jui Jitsu Championship that is held every year.

BJJ puts little emphasis on strikes and instead focuses on locks and holds, making it suitable to use against larger, stronger opponents.

BJJ has been very successful in UFC and mixed martial arts in general due to its very strong ground component and the ability it gives fighters to defeat stronger opponents, as seen by Royce Gracie winning the first two UFC tournaments. Other top BJJ fighters include Rickson Gracie, JT Torres, and Amauri Bitetti.

Despite coming from entirely different places and with very different fighting styles, in some ways Muay Thai and BJJ are alike. Here are a few examples: